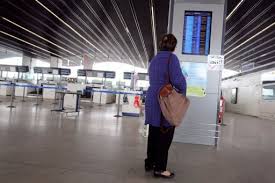 Today's word is grève -- strike -- as another protest snarls the French transportation system -- in the middle of summer, no less! This time, it's the air traffic controllers who've launched a 3-day strike to protest integration with the EU flight traffic control system, cancelling every flight in France.

French workers don't strike the way US workers do, staying out till they get a wage increase or some other concessions. No, Frenchmen strike for a predetermined period, often as little as a day, just as a protest.

You'd think this strategy of pissing everyone off would be counterproductive, and the public would demand that the government not give in to this blackmail. But, remember, this is France, so people are more likely to say, "This is a pain, but thanks for bringing this threat to French sovereignty to make attention," and they back the workers. I've had to scramble in two of my past 3 trips to France because of train strikes - the last time I was lucky to make it out of the country.

Of course, having made it out, I can't wait to get back in.
William Alexander at 8:04 AM
Share