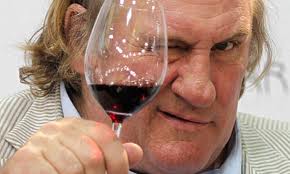 Guess The New Yorker isn't reading this blog. In their February 25, a feature about the French actor Gérard Depardieu ridicules him for allegedly describing a bottle of rum he received from Castro as "God in velvet underwear." Most likely, Depardieu was simply using the common (if odd) French idiom, C’est le petit Jésus en culotte de velours -- it's baby Jesus in velvet shorts --  most often employed to describe, say, a smooth wine. As I explained in a posting a while back, an earlier generation of Americans might have exclaimed, “It’s the cat’s pajamas!”

Please, New Yorker, Depardieu deserves to be ridiculed for many things (not least of which is drunkenly peeing in the aisle of an Air France plane), but let's not kill him for employing a colorful idiom. Your provincialism is showing.
William Alexander at 8:16 AM
Share